July 19, 2012 – Vancouver, BC – Southern Arc Minerals (TSX-V: SA, OTCQX: SOACF) (“Southern Arc” or “the Company”) is pleased to provide an update on activities at its Sabalong property.

Southern Arc and Vale S.A. (“Vale”) completed three diamond drill holes at the Sabalong property (totalling 1,811 metres) to test potential porphyry intrusive targets that had been defined by geophysical surveys. Drilling intersected weakly altered intrusions and volcanics with no significant porphyry copper mineralization. With Phase 1 exploration complete, Vale has elected not to proceed to Phase 2 and has withdrawn from the Sabalong project.

Southern Arc now holds a 100% economic interest in the Sabalong project and is proceeding with a drill program to test epithermal gold vein targets in the Toyang prospect as defined by historical Newmont (1986–92), Rio Tinto Zinc (“RTZ”) (1993–98) and Company (2007–present) exploration work.

On July 16 the Company commenced a drill program of up to 2,000 meters to test the upper parts of the Toyang quartz vein system. The Toyang prospect comprises a 2.5+ km northeast trending structural zone with three main mineralised zones including the Gempang Budi, Olat Toyang and Labangkang targets. Mineralization comprises areas of strong argillic and advanced argillic altered volcanics hosting low-sulfidation auriferous quartz veining and breccia zones up to 20m wide. Shallow scout drilling by RTZ in 1997 reported encouraging drill intersections including 8m @ 11.50 g/t Au (SL22), 32m @ 3.50 g/t Au (SL18) and 28m @ 1.49 g/t Au (SL28) (Figure 1). These drill intersections all lie within a 1.0 km long >0.1 g/t gold soil anomaly as defined by RTZ grid soil sampling. While management does not have all of the information required to confirm the QA/QC process for the RTZ drilling, Southern Arc believes the RTZ drill intersections are indicative of the potential in the area. More recent surface channel sampling by Southern Arc has confirmed the levels of mineralization discovered by RTZ, with surface channel sampling results including 4m @ 7.23 g/t Au, 4m @ 6.79 g/t Au and 10m @ 5.91 g/t Au.

Vale remains a committed partner at the East Elang project. Under the terms of the October 2010 Option and Joint Venture Agreement, Vale can earn a 75% interest in the East Elang property by advancing the property to bankable feasibility study, with a minimum Phase 1 expenditure of US$1.2 million within one year from the date on which Southern Arc receives a Minister of Forestry Pinjam Pakai permit for the property. Southern Arc was granted a mining business license (IUP) for East Elang in December 2009. While the property is considered highly prospective due to its location and results from aerial surveys, exploration of the East Elang property has been deferred pending reclassification of the property’s forestry status. Application has been made to the Regency authorities for suspension (back-dated for two years) of the IUP license until the reclassification process has been completed, ensuring that Southern Arc and Vale have adequate time to evaluate the property once exploration commences.

In recognition of their added responsibilities and duties, Southern Arc has issued 300,000 stock options to each of an officer and a director of the Company, exercisable at $0.25 per share and expiring five years after the date of grant. The stock options vest over 24 months, with 25% to vest on the six-month anniversary of the date of grant and 25% every six months thereafter.

Southern Arc Minerals Inc. is a Canadian mineral exploration company with an aggressive exploration, acquisition and growth strategy. The Company’s portfolio includes four exploration projects with epithermal gold and copper-gold porphyry prospects on the Lombok and Sumbawa islands in Indonesia, one of which is being advanced in partnership with Vale S.A. The Company’s key exploration property is its West Lombok project, with several gold-rich copper porphyry and epithermal gold vein prospects. Southern Arc is listed on the TSX Venture Exchange under the symbol SA and on the OTCQX International under the symbol SOACF. More information is available at www.southernarcminerals.com or by emailing This email address is being protected from spambots. You need JavaScript enabled to view it..

This news release contains forward-looking statements relating to expected or anticipated future events and operations, timing of projects and anticipated results that are forward-looking in nature and, as a result, are subject to certain risks and uncertainties, such as  general economic, market and business conditions, the regulatory process and actions, technical issues, new legislation, competitive and general economic factors and conditions, the uncertainties resulting from potential delays or changes in plans, the occurrence of unexpected events, and the company's capability to execute and implement future plans. Actual results achieved may vary from the information provided herein as a result of numerous known and unknown risks and uncertainties and other factors. There is no representation by the company that actual results achieved during the forecast period will be the same in whole or in part as that forecast.

The technical information in this document has been reviewed by Southern Arc’s Executive Vice President, Andrew Rowe, B. App. Sc. Geology, MAusIMM. Mr. Rowe has over 18 years of international mineral exploration experience throughout Southeast and Central Asia and Australia. During this time he has held such positions as Principal Geologist – Feasibility Studies, Senior Geologist and Consulting Geologist. The technical information in this document has also been reviewed by Southern Arc’s President & Chief Operating Officer, Dr. Mike Andrews, PhD, FAusIMM, who has sufficient experience relevant to the style of mineralization under consideration and qualifies as a Qualified Person as defined by National Instrument 43-101.

The drill program and sampling protocol is managed by Southern Arc under the supervision of Andrew Rowe. The diamond drill holes are drilled at PQ, HQ and NQ sizes depending on hole depth and core recovery to date has averaged 98.5%. Half core is cut by rock saw and is generally sampled according to geological contacts ranging between 0.2 to 2.5 metres in length. Three quality control samples (one blank and two standards) are inserted into each batch of 40 samples. The half core samples are securely transported from the project site to the Intertek Testing Services (“ITS”) sample preparation laboratory in Sumbawa Besar via private truck hired by Southern Arc. Sample pulps are then sent to the ITS Jakarta laboratory by ITS. Gold is analyzed by fire assay with AAS finish and a four-acid digestion with ICP-MS finish is used to analyze a full suite of elements including silver and base metals.

For surface rock samples, standard sampling procedures involved removal of any obvious surface weathering and/or organic matter, followed by the collection of a representative sample of the inferred mineralized rock material. Continuous 1–3 metre outcrop channel samples were oriented perpendicular to any obvious mineralized structure and a continuous channel of HQ/NQ core proportions using either a rock chisel and hammer or Stihl TS50 rock saw was collected. Emphasis was placed on collecting a uniform representative sample over the channel width to avoid sample bias. Sample intervals were selected using geological boundaries. Standard reference check samples along with blanks were submitted into the sample stream to approximate one check sample per 25 rock samples. The rock samples were securely transported from the project site to the ITS sample preparation laboratory in Sumbawa Besar via a Southern Arc vehicle. Sample pulps were sent to the ITS Jakarta laboratory by ITS. Gold was analyzed by fire assay with AAS finish and a four-acid digestion with AAS finish to analyze a full suite of elements including silver and base metal.

ITS is one of the world’s largest product and commodity testing, inspection and certification organizations. The Jakarta laboratory is ISO 17025 accredited and employs a Laboratory Information Management System for sample tracking, quality control and reporting. 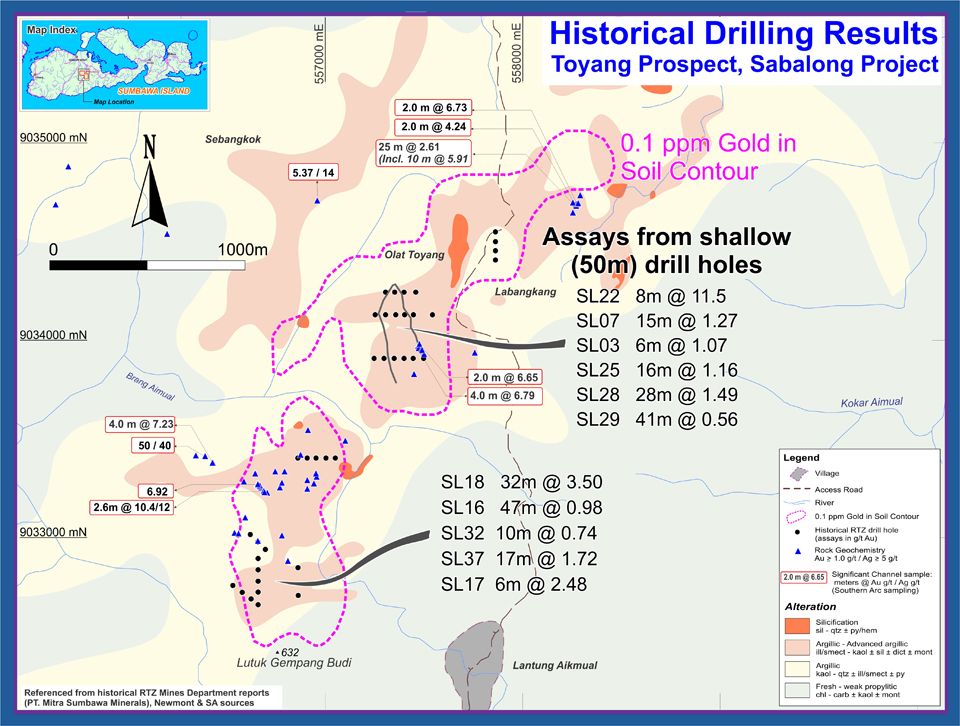