Vancouver, B.C.: Southern Arc Minerals Inc. (TSX Venture: SA) is pleased to announce the granting of another exploration license (Kuasa Pertambangan "KP”) to the company, through its locally-controlled Indonesian entity, over part of the Wonogiri Regency, Central Java Province (Figure 1). This property is nearby the Company's Karangtengah KP, the acquisition of which was previously reported in news release NR 08-15 on September 30, 2008. The new Tirtomoyo KP area of 4,896 ha was previously minimally explored by the state-owned company Timak Tbk between 1998 and 2002 under a large super KP license. The KP license issued to Southern Arc by the regency authorities is valid for twelve months and can be extended for a further 12 months as part of the General Survey conditions of the license. Following the enactment of Indonesia's new mining law on January 12, 2009, the Department of Energy & Mineral Resources has indicated that KPs will transition automatically into a new mining business license (IUP).

Historical Dutch references on the Tirtomoyo area report evidence of exploitation by the Japanese during WWII of base metal skarn mineralization in the district, along with inferred porphyry style veining. Potential for porphyry Cu-Au mineralization was confirmed by Au-Cu-Mo-Zn stream sediment geochemistry from a joint Japanese-Indonesian government geochemical mapping program in early 1990s. Little or no exploration in the district was undertaken by Timak Tbk, whilst government agency surveys in 2002 and 2005 reported the presence of artisan miners exploiting quartz-base metal veins and stockworks.

Initial prospecting of the area was carried out by one of the Company's consultants in late 2007, who observed in the area the presence of high-sulfidation epithermal mineralization telescoping over a previous porphyry Cu-Au event, somewhat analogous to the Company's Selodong Prospect on west Lombok Island. The area forms part of the Old Andesite Formation, which is host to a number of porphyry Cu-Au occurrences along the southern coast of Java, including Bukit Tujuh (Banyuwangi), Ciemas (Jampang), Bayah, etc. The structural setting and erosional level of diorite intrusives are similar to that of Newmont's Batu Hijau deposit.

Initial low-cost exploration programs are planned to commence in both KP areas later in 2009. The Company actively continues to evaluate mineral properties presented to it from areas along the southern Sunda-Banda island arc. 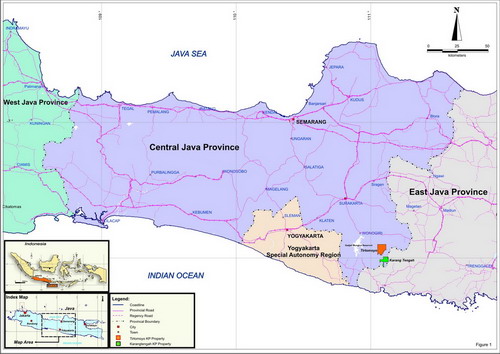