Based on these results (see below for additional details) both drill rigs have been moved to test other porphyry Cu-Au targets, or extensions of known mineralization. Hole SLD011 targeting northern extensions of Montong Botek porphyry Cu-mineralization was completed on January 13, 2008, with final results expected in the next 7-10 days. SLD012 is currently targeting gold anomalous stockworks coincident Au-Cu-Mo soil and magnetic-IP anomalism and in the Belikat target area. Hole SLD013 is targeting a potential northwest extension of Montong Botek toward Kekalik.

Drill hole SLD009 reported only a low grade gold intercept of 70.80 m at 0.18 g/t Au from 95.7 to 166.5 m. SLD009 drilled southward at an orientation of 195 degrees and an inclination of -65 degrees to a depth of 600.0 metres. Whilst variably stockworked diorite was encountered between 0.0 to 78.7 m, the majority of the hole (78.7 to 441.0 m) intersected phyllic altered polymict breccia (diatreme?) cross-cut by zones of anhydrite-pyrite stockwork with trace amounts of chalcopyrite and molybdenite. From 441.0 to 600.0 m fault slivers of diorite porphyry with phyllic overprinting, skarn and metavolcanics were logged.

SLD010 intersected intercepts of 32.0 m at 0.16 g/t Au from 63.8 to 95.8 m and 22.0 m at 0.20 g/t Au from 160.5 to 182.5 m. SLD010 drilled northeastward at an orientation of 040 degrees and an inclination of -65 degrees to a depth of 600.5 metres. For the entire length of the hole intense phyllic to argillic altered polymict breccia (?diatreme) with stockwork andhydrite-carbonate-pyrite veining was encountered. Diorite intrusive with variable porphyry-style quartz stockwork veining and later intense phyllic overprinting were logged as a component of breccia clasts. Targeted stockwork vein zones mapped in stream tributaries are most likely large rafted blocks (up to 180 m length x 50 m wide) that were stoped out of pre-existing mineralized intrusive body through diatreme brecciation events.

All assaying of samples was undertaken by the ITS laboratory in Jakarta. ITS is one of the world's largest product and commodity testing, inspection and certification organizations. The Jakarta laboratory is ISO 17025 accredited and employs a Laboratory Information Management System (LIMS) for sample tracking, quality control and reporting. In addition to the laboratory's quality assurance program, the Company employs its own comprehensive quality assurance/control program including blanks and standards, along with reassays of selective drill pulps by independent industry-accredited laboratories.

The securities described in this press release will not be or have not been registered under the U.S. Securities Act of 1933 and may not be offered or sold in the United States absent registration or an applicable exemption from registration requirements. 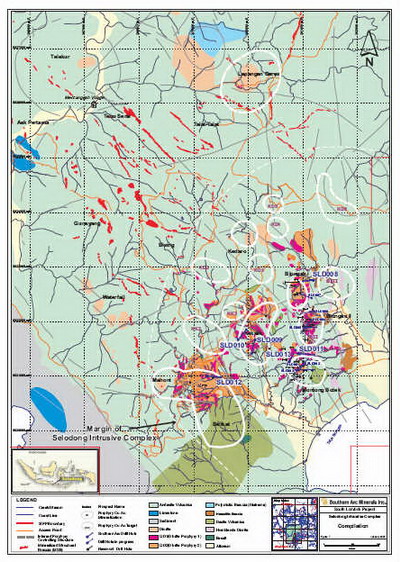