Southern Arc remains committed to its Indonesian properties and anticipates having a first review of the fifteen porphyry prospects at Selodong completed by July 31, 2008. Drill results from holes 21 to 23 will be released on July 10, 2008. Southern Arc operations will remain focused on Indonesia.

Subsequent to the investment in Canada Nickel and Southern Arc completing its 2008 Indonesian work program, the Company estimates that at December 31, 2008 it will still hold a minimum of $2.5 million in working capital.

Benefits of the Investment in Canada Nickel to Southern Arc Shareholders

Canada Nickel is a private company that is completing a non-brokered private placement consisting of up to 28 million shares at $0.35 per share for gross proceeds of up to $9.8 million. Southern Arc has subscribed for 15.3 million non-flow-through shares in consideration for $5.355 million. Canada Nickel is issuing the balance of up to 13.7 million shares to strategic arm's-length investors. Upon completion of the financing, Canada Nickel will have a maximum of 38 million common shares issued and outstanding.

The Property was originally staked by Diamondex on the basis of regional aeromagnetic data, with support from recent and historic government interpretations of geology from magnetic data. The property includes key positive magnetic anomalies, typical of mafic and ultramafic lithologies and prospective for nickel mineralization, along the entire 250 km length of the newly interpreted greenstone belt. A few drill holes in the public domain corroborate the presence of the volcanic belt. There are few known rock outcrops in the staked area. Consequently, accurate interpretation of geophysical surveys has been used to identify viable drill targets. A 5,105 line-km Variable Time-delayed Electro-Magnetic (VTEM) survey was recently completed over approximately one-third of the Property (Area 2). Initial results indicate the presence of numerous high quality conductors with strong coincident magnetic anomalies. Interpreted strike lengths of thirty-five late-time conductors range from 300 metres to 1,600 metres. The basement conductors on this property have been interpreted by independent consultants to be excellent targets for magmatic sulphide exploration. The Property, at 407,400 acres (approximately 165,000 hectares), represents the largest land position in the district.

The Property is located in the "Ring of Fire" area (Figure 1), portions of which are within 12 kilometres of both the Double Eagle Nickel deposit (Ni 7.9%, Cu 3.4%, PGE (platinum group elements) 18.3 g/t over of 35 metres – hole 27, Jan 28, 2008, Noront Resources news release) and the McFauld's Lake VMS (volcanogenic massive sulphide) deposit (Cu 8.02% over a width of 18.8 metres – hole McF-04-57, Nov 4, 2004, Spider Resources news release). The property is approximately 65 kilometres southwest of De Beers' Victor Diamond Mine. The district has clear and demonstrated nickel, PGE and VMS (e.g., copper, zinc, lead, silver) potential.

Geotech Ltd. has been contracted to fly VTEM over the remaining parcels of the Property (Areas 1 and 3). The 8,000 line km survey is expected to get underway in the near term. During the summer season, Diamondex and Canada Nickel will follow-up selected high-priority airborne anomalies with detailed ground geophysical surveys to further assist conductor characterization and ranking (including width, dip, depth, and ultra-low frequency EM response). These efforts will aid in the target selection for the initial diamond drill test program, which is expected to get underway during Q4 of 2008 and be completed during Q1, 2009. It is expected that approximately 16 targets will be tested over this period.

Southern Arc's investment in Canada Nickel was unanimously approved by the independent directors of the Company, who were advised by independent legal counsel that this transaction is a related-party transaction which does not require the Company to prepare a valuation or to seek shareholder approval under the policies of the TSX Venture Exchange or Multilateral Instrument 61-101. This investment in Canada Nickel represents less than 25% of Southern Arc's market capitalization, permitting the Company to rely upon the exemptions from the valuation and shareholder approval requirements contained in section 5.5 (a) and 5.7 (a) of MI 61-101. One item of primary consideration for the independent directors was the financial status of Southern Arc. Subsequent to the investment in Canada Nickel and Southern Arc completing its 2008 Indonesian work program, the Company estimates that at December 31, 2008 it will still hold a minimum of $2.5 million in working capital.

The current board of directors of Canada Nickel is comprised of:

Mr. Proust has advised public and private companies with respect to debt and equity financing, mergers and acquisitions, and corporate restructuring since 1986. Mr. Proust has served on numerous boards and in several senior operating positions for private companies and TSX Venture Exchange listed companies, including as current President, Chief Executive Officer and a Director of Southern Arc Minerals Inc. (TSXV:SA), Chairman and a Director of Canada Energy Partners Inc. (TSXV:CE), President, Chief Executive Officer and a Director of Superior Mining International Corporation (TSXV:SUI), and as a Director of Western Uranium Corporation (TSXV: WUC) and Pamodzi Gold Limited (JSE).

Mr. Proust has extensive experience in corporate governance and is a graduate of The Directors College, De Groote School of Business at McMaster University and holds the designation of Chartered Director (C.Dir.).

A graduate of the University of Western Ontario, Mr. Durham has worked in mineral exploration for more than 30 years in various positions with junior mining companies exploring primarily for precious and base metal deposits in Ontario and Quebec, but also with companies exploring across Canada, in the USA, and in Africa. Mr. Durham has been an integral member or leader of various exploration teams credited with the discovery or definition of several significant mineral deposits including: the David Bell Mine (Hemlo), the Golden Giant Mine (Hemlo), the Redstone Nickel Mine (Timmins), the Bell Creek Mine (Timmins) and several nickel-copper deposits on the Raglan South Project of Canadian Royalties that are being evaluated for their economic viability.

Mr. Snucins is the Chairman and Founder of Fallingbrook Management Inc., a private investment company engaged in the business of investing in significant minority or controlling positions in both public and private companies. Mr. Snucins began his business career in 1978 at which time he helped create Canadian Corporate Funding Limited ("CCFL") as a founding shareholder and Director. From 1988 to 1993, Mr. Snucins was President, Chief Operating Officer and Director of Clairvest Group Inc., a Canadian merchant bank listed on the Toronto Stock Exchange. Mr. Snucins was formerly: the President and a Director of Atlas Cromwell Ltd. (May 1998 to October 2003); Chief Financial Officer and Director of Binscarth PVC Ventures Inc. (March 2004 to June 2005), both TSX Venture Exchange companies; Director of NHC Communications Inc. (August 1998 to December 2003), a Toronto Stock Exchange company; and President and Director of Avanti Mining Inc. (February 2006 to June 2007), a CNQ company. Mr. Snucins has been involved in the management and direction of numerous public and private companies, including Masonite (formerly Premdor Inc.), ANZ Bank Canada, Prestolite Batteries Inc., Unitron Industries Inc. and IBEX Technologies Inc.

Mr. Giuffre, B.A. (Economics/Business), LLB., has over twenty five years of combined experience in business and legal matters, and has a transaction-based practice in the areas of corporate finance, securities and corporate and commercial, project finance, and mergers and acquisitions. He acts for a wide range of Canadian and foreign corporations, public and private, and those who finance them such as underwriters, investment dealers, financial institutions and venture capitalists.

On Behalf of the Board of
Southern Arc Minerals Inc.

The securities described in this press release will not be or have not been registered under the U.S. Securities Act of 1933 and may not be offered or sold in the United States absent registration or an applicable exemption from registration requirements.

The TSX Venture Exchange does not accept responsibility for the adequacy or accuracy of this release.

NOT FOR DISTRIBUTION TO U.S. NEWSWIRE SERVICES OR FOR DISSEMINATION IN THE UNITED STATES 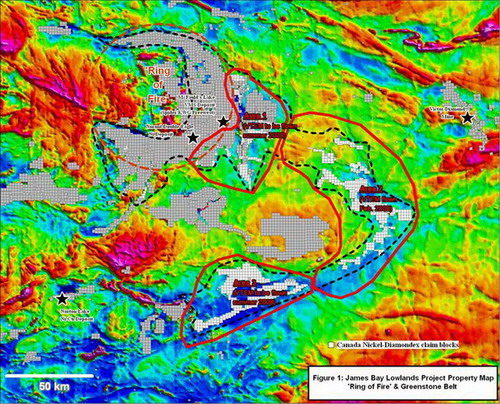