SLD023, drilling the northern extension of the Montong Botek porphyry target, has returned the longest mineralized drill intercept on the property to date with: 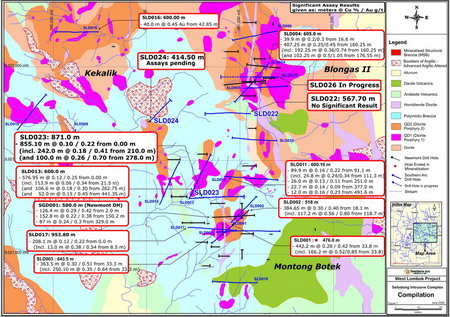 SA and historical Newmont drilling has partially defined an open-ended north-south elongate Cu‑Au mineralized zone of 450 m long by up to 200 m wide at Montong Botek. This north-south trending mineralized zone lies within an area defined by SA drill holes SLD011, SLD013, and SLD023 in the north and shallow Newmont drill holes PSG012 to PSG014 and PSG017 to the south.

SLD023 was drilled eastward at an inclination of -70 degrees to a depth of 871.0 m. From surface to a depth of 592.0 m polymictic breccia comprising mineralized quartz-diorite (QD1) and altered diorite clasts were logged. Narrow diorite dykes intrude the breccia between 364.0 to 366.0 m and 529.0 to 561.0 m. From 592.0 m until the end of hole altered volcanic and volcanic-derived sediments were encountered.

SLD022 was drilled 150 m south of SLD005 at Blongas II to test for potential southwest extensions of high grade mineralisation previously intersected in SLD004: 407.25 m @ 0.25% Cu and 0.45g/t Au, including 192.25 m @ 0.36% Cu and 0.74g/t Au (Figure 1). The drill hole rationale was based on elevated Cu-Au soil geochemistry at this locality. However, no significant mineralisation was intersected in the drill hole.

SLD021 was drilled at Lepangan Geres, the most northerly porphyry target within the Selodong Intrusive Complex, approximately 7.5 km along strike of the same N-NW structure that hosts the Montong Botek and Blongas I-Blongas II porphyry targets. It comprises a north‑trending, open-ended 600+ m long by up to 300 m wide zone of discontinuously exposed porphyry stockwork and sheeted vein zones hosted within altered diorite porphyry intrusives and altered volcanics. The area is on the edge of a large circular magnetic "high” and at the intersection of regional N-S and E-W fault structures. Surface sampling has returned intersections including 80 m @ 0.22 g/t Au (incl. 20 m @ 0.11% Cu/0.30 g/t Au), 55 m @ 0.31 g/t Au and 20 m @ 0.33 g/t Au respectively.

SLD021 (Figure 2) was sited in the centre of the main diorite porphyry body to test shallow to moderate depth extensions of surface porphyry Cu-Au mineralization within the inferred north-south structural corridor.

SLD021 was drilled eastward at an inclination of -70 degrees to a depth of 521.00 m. From surface to 198.0 m intensely sheared, phyllic altered diorite porphyry intrusive hosting weak to moderate amounts of quartz-sulfide stockworking (QD2 phase) were logged. For the remainder of the hole (198.0 to 521.0 m) sheared volcanics and volcanic sediments were intersected. A late-stage diorite porphyry dyke was noted in core from 466.5 to 478.2 m. Overall, the drill core is highly sheared and fractured, typical of drilling across the structural grain of a major fault or fracture zone.

All assaying of samples was undertaken by the ITS laboratory in Jakarta. ITS is one of the world's largest product and commodity testing, inspection and certification organizations. The Jakarta laboratory is ISO 17025 accredited and employs a Laboratory Information Management System (LIMS) for sample tracking, quality control and reporting. In addition to the laboratory's quality assurance program, the Company employs its own comprehensive quality assurance/control program including blanks and standards, along with reassays of selective drill pulps by independent industry-accredited laboratories. 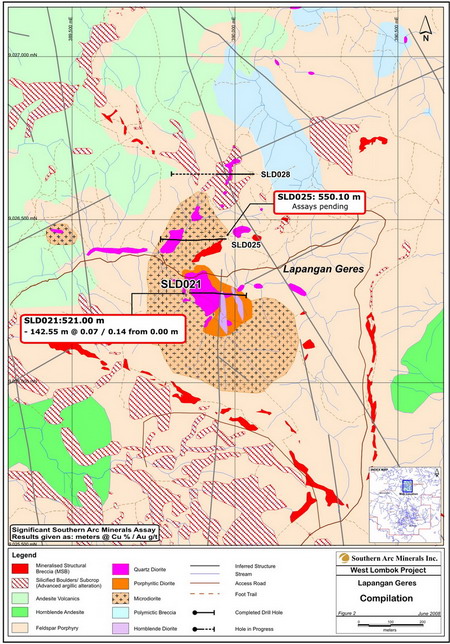