Vancouver, B.C.: Southern Arc Minerals Inc. (TSX Venture: SA) is pleased to announce that the third diamond drill hole (MB003) at its Montong Botek porphyry Cu-Au target has intersected further encouraging copper-gold mineralization. The Montong Botek porphyry forms part of the Selodong Intrusive Complex (SIC), which is situated at the southeast end of a 13 km long, northwest trending structural corridor of mineralization and alteration along which also lie the Pelangan Gold Prospect and the Mencanggah Epithermal/Porphyry District, all within SA's Lombok Property.

Drill hole MB003 was completed at a total depth of 643.5 metres. Following the first 33.3 metres, which was not mineralized, drilling intersected:-

Drill hole MB003 was drilled eastward at an inclination of -60o targeting the eastern and southern extensions of Cu-Au mineralization intersected in MB001 and MB002 (Figure 1).

The upper half of MB003 to a depth of 288.4m intersected chalcopyrite and locally bornite mineralized porphyry stockworks hosted in a series of quartz diorite intrusives, which were later cut by hornblende diorite dykes. From 288.4 to 497.2m a polymictic diatreme breccia intersected in both MB001 and MB002 was logged. The breccia contains variable amounts of mineralized diorite clasts which have been stoped out of the enclosed porphyry stock and contribute to elevated Cu-Au grades. A slice of basement metasediments and associated garnet-epidote skarns was logged from 497.2 to 526.4 m, whilst feldspar to diorite porphyry intrusives often displaying high temperature alteration assemblages was encountered for remainder of the hole.

The drill rig has been moved to the Blongas II Porphyry target (Figure 1), located 600 m north of Montong Botek. Coring of the first of three planned holes commenced on June 23, 2007 and is expected to be completed by mid July.

All assaying of samples was undertaken by the ITS laboratory in Jakarta. ITS is one of the world's largest product and commodity testing, inspection and certification organizations. The Jakarta laboratory is ISO 17025 accredited and employs a Laboratory Information Management System (LIMS) for sample tracking, quality control and reporting. In addition to the laboratory's quality assurance program, the Company employs its own comprehensive quality assurance/control program including blanks and standards. 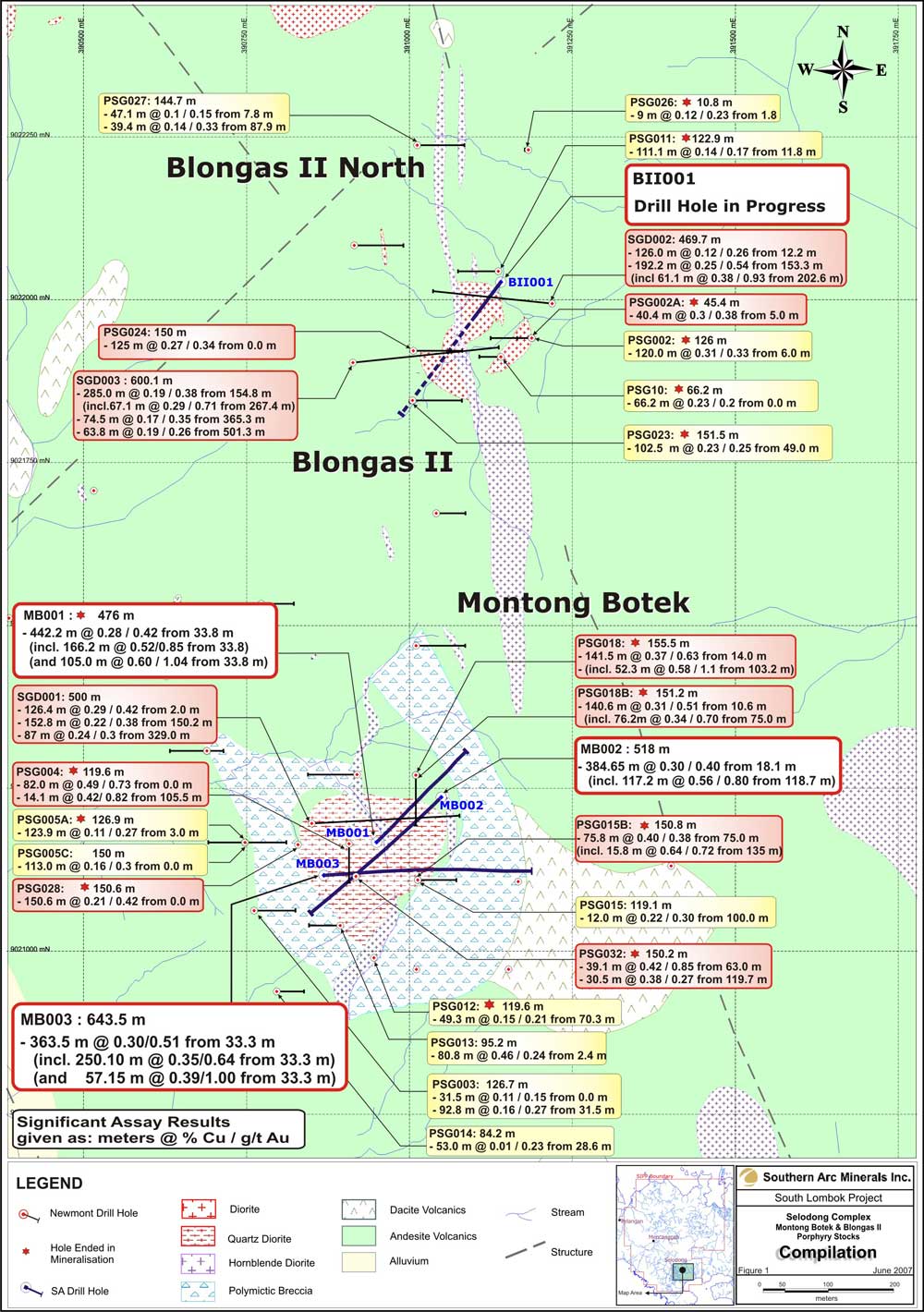