The Pelangan Prospect is located approximately 1½ hours drive on good roads from Lombok's capital, Mataram. It lies on the northwest end of a 13 km long, northwest trending structural corridor of mineralization and alteration within which also lie the Selodong gold/copper porphyry Prospect and the Mencanggah epithermal/porphyry district, both of which are the targets of on¬going surface exploration.

Shallow scout drilling and surface mapping at Pelangan have defined extensive, structurally controlled, gold-mineralized breccia zones, occurring over an area of 3 by 2 km. These include the Tanjung-Jati, Kayu Putih, Raja, and Lala zones (see Figure 1). SA geologists apply the field nomenclature "Mineralized Structural Breccias" or "MSB"s to these targets.

The Pelangan Prospect is open to the south and east where additional mineralized breccias have been located and surface exploration is on-going.

The Raja, Ratu and the Lala MSBs are located within the southern portion of the Pelangan Prospect. Zones of significant gold/silver mineralization have been intersected in 12 of 19 drill holes completed (see Table 1).

Highlights of drill hole intervals to date include: Raja MSB

The Raja MSB comprises a 1.7 km long north-northwest trending mineralized, linear breccias zone which has been subdivided by mapping into north, central and southern zones. The north-northwest trend of Raja is a secondary structure related to the dominant 320° orientation, which hosts numerous mineralized breccias and porphyry occurrences within the West Lombok Property. At surface the Raja MSB exhibits a 'pinch and swell' character with zones up to 20 metres in width.

Shallow drilling along the central and southern zones of the Raja MSB to date has confirmed continuity of gold mineralization with a 600 metre strike length between drill holes QDG06 and RDG07. Two holes have been completed on the northern extension of the vein and have intercepted significant quartz and sulfide rich zones, confirming the continuity of the structure north from the central Raja MSB. Assay results are pending for the two northern holes, RDG13 and 14 (see Figure 2).

All drill holes were cored at angles between 55° to 60°, and spaced at intervals between 50 to 150 metres along strike, and confirming a vertical to sub-vertical dip on the structure. Most of the mineralization was intercepted below the base of surface oxidation.

The program to date has confirmed the presence of extensive, near-surface gold mineralization within the central and southern parts of the Raja MSB. Drilling intercepts are of a comparable magnitude to earlier surface outcrop sampling.

First-pass mapping and sampling has recently been completed over the Lala MSB, which parallels the Raja MSB 350 metres to the east. Mapping has defined a series of mineralized structures oriented between north-northwest and east-west over a 1 kilometre strike. Mineralized structure exposures are comprised of outcrops up to 15 metres in width in the southern zone but generally are limited to discontinuous sub-crops to the central and northern zones. Preliminary assay results from 163 rock-chip samples collected to date show consistently high grades along the length of the Lala MSB. The average gold result from 163 rock-chips is 1.6 g/t Au with a peak result of 51 g/t Au (see Figure 2). A series of shallow drill holes is planned to test the down-dip extensions of these high-grade surface samples.

The Tanjung-Jati MSB is located in the western region of the Pelangan Prospect. Zones of potentially significant gold mineralization have been intersected in 8 of 13 drill holes completed within the Tanjung-Jati MSB (see Table 2).

Highlights of drill hole intervals to date include:

At surface the mineralized structural breccias exhibit a 'pinch and swell' character with zones up to 20 metres in width. Shallow drilling along the strike length of the zone has confirmed continuity to depths of around 50 metres with locally high-grade intercepts (see Figure 3).

All drill holes to date have been cored at angles between 55° to 60°, and spaced at intervals between 50 to 230 metres along strike, confirming a vertical to sub-vertical dip on the structural breccias. Most of the mineralization has been intercepted below the base of surface oxidation.

The program to date has confirmed the presence of mineralized zones with locally high-grade intercepts. Sub-surface intercepts are up to 15 metres wide showing good continuity along strike. Infill and deeper drilling will seek to locate more high-grade mineralization as significant areas along strike, which also host high-grade surface samples, have yet to be drilled. Drilling intercepts received so far are generally comparable in magnitude to previous outcrop sampling.

The Kayu Putih Mineralized Structural Breccias ("Kayu Putih MSB") is situated in the northern area of the Pelangan Prospect. Zones of potentially significant gold mineralization have been intersected in 9 of the 14 drill holes assayed within the Kayu Putih MSB (see Table 3).

Highlights of drill hole intervals to date include:

Southern Arc has completed 17 shallow drill holes drilled on a north-south grid orientation at angles between 55° to 60° dip with variable spacing between holes. Final assay results are still awaited for drill holes KDG15to KDG17. The deepest mineralized intercept occurs at 59 metres vertically below surface and most intersections occur below the base of complete oxidation. Dips of the structures vary between 60° to 80°. The majority of drill holes are drilled perpendicular to the mineralized structures. Drilling at Kayu Putih has been spaced between 50 to 100 metre intervals (see Figure 4).

The program to date has confirmed the presence of near surface high-grade zones within the southern part of the mineralized structure. A 450 metre long strike zone between drill holes KDG02 and KDG12 shows the best potential for continuous high grade mineralization. Future drilling will test the down-dip extension of this zone for high-grade shoots.

A ground geophysical survey using CSAMT resistivity mapping techniques has been completed over the Pelangan Prospect. Survey results indicate depth continuity to the MSB structures as well as potential parallel zones south of the identified mineralization. Petrographic and fluid inclusion studies have also been undertaken to clarify the style of mineralization as an aid to further exploration. 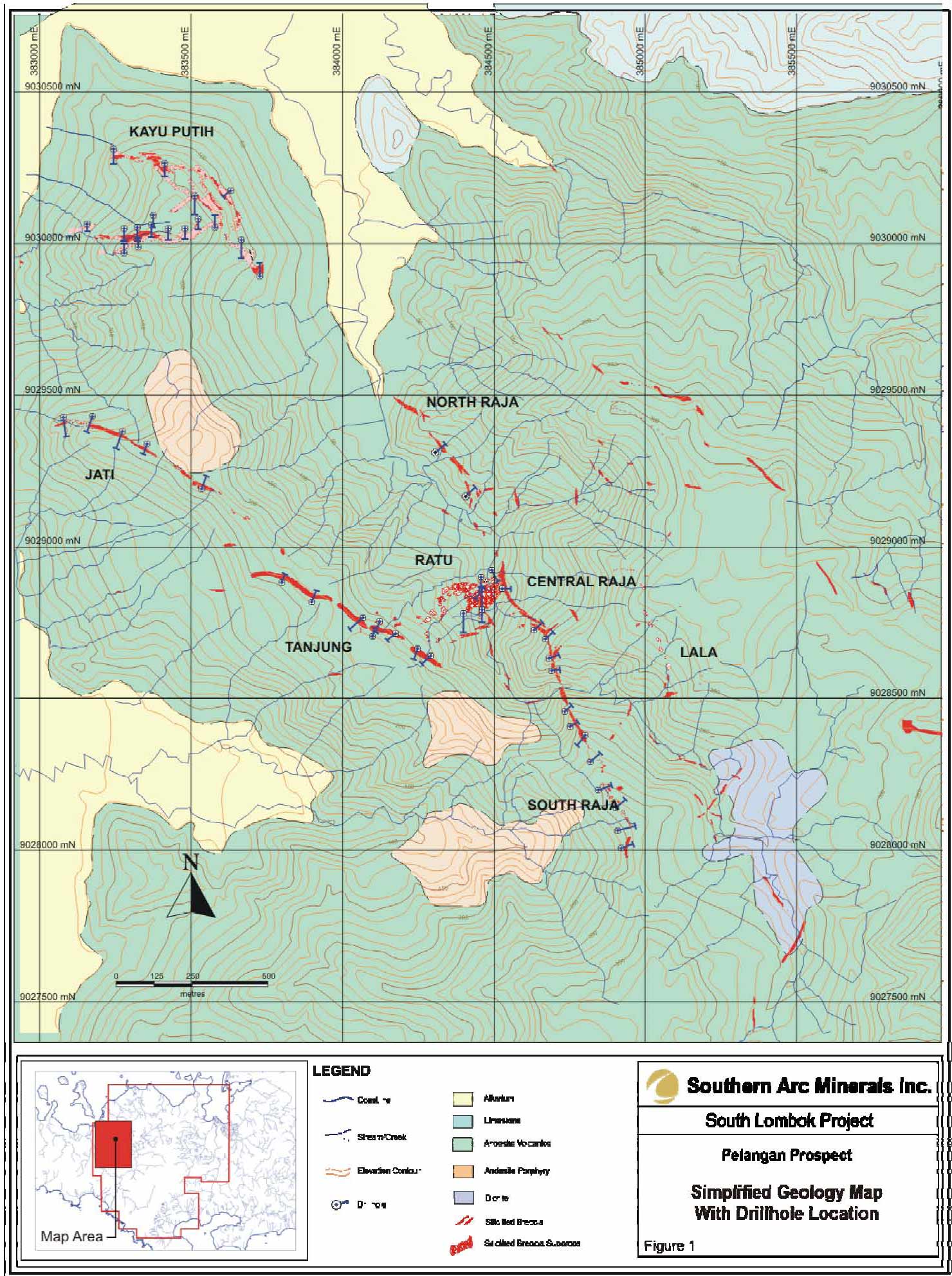