Southern Arc Minerals Inc. (TSX Venture: SA) is pleased to announce that the company has received assay results from a further eight diamond drill holes of its phase two drilling program at the Lemonga Prospect located on Sumbawa Island, Indonesia. The holes LDG-23 to LDG-30 were drilled to test lateral extensions of high-grade, gold-silver shoots intersected in an earlier scout drilling program, along with CSAMT ("resistivity") linear targets interpreted as extensions of known veins and breccia zones.

News release 06-04 and 06-05 dated January 31, 2006 and February 21, 2006, respectively, reported on the first six drill holes of the phase two drill program. Subsequently, drill holes LDG-23 to 25 and LDG-27 were targeted to test northern extensions of gold-silver intercepts from the central portion of the Amy Vein. In some instances holes were drilled to test continuity of grade below previous drill intercepts (LDG-04 & 05).

Drill holes LDG-26 and LDG-28 to 29 were drilled to test central and northern portions of the Betty and Cici Veins, along with inferred splays of the vein structures.

All holes were drilled at right angles to the strike of the vein at -45º and -60º inclinations.

In all eight drill holes, significant widths of quartz veining and mineralized wall rock were intersected. In the north Amy Vein segment, drilling results continued to display moderate gold-silver grades in quartz veins of variably steep to moderate dips, suggesting a more complex post-mineral structural regime prevailing in this segment compared with the more southerly portions of the vein.

The area between the central to northern Betty and Cici Veins is cut by a steeply-dipping vein/veinlet swarm over a width of at least 100m. Most of the veins are of moderate widths and grades, but a few high grade intersections will require follow-up trenching and drilling.

The southern extension of the Dessy Vein displays significant width and grade accompanied by several narrower, apparently parallel, Au-Ag bearing veins on both its eastern and western side. One vein, 17m to the east, is of comparable grade and width of the LDG-11 drill intercept, yet does not crop out. The Dessy Vein system is interpreted by the results of the CSAMT survey to extend a further 350 meters south, though only rare, scattered subcrop has been mapped on surface.

Highlights of intercepts from drill holes LDG23-30 (Figure and Table 1) include:

The Lemonga Prospect is a low-sulfidation epithermal quartz vein system over which surface mapping by Southern Arc has confirmed argillic alteration dominant within an hydrothermal upflow area approximately 1 km East-West by 1.5 km North-South. Five quartz vein targets, named Amy, Betty, Cici, Dessy and Evi, have been identified within the alteration zone. The best exposed vein, the Amy Vein, has a mapped strike extent of at least 950 meters.

The information in this release has been compiled under the supervision of Southern Arc's Vice President of Exploration Hamish Campbell B.Sc.Geology, MAusIMM. Mr. Campbell has over 21 years of international mineral exploration experience including 19 years in Indonesia during which he has held such positions as Exploration Manager, Senior Geologist and Consulting Geologist. Mr. Campbell has sufficient experience relevant to the style of mineralization under consideration and qualifies as a Qualified Person as defined in terms of NI 43-101. 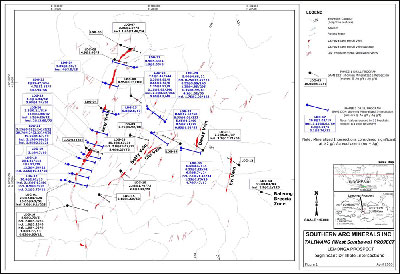