Southern Arc Minerals Inc. (TSX Venture: SA) is pleased to announce that the company has received assay results from a further three diamond drill holes of phase two drilling at its Lemonga Prospect located on Sumbawa Island, Indonesia. The holes LDG-20 to LDG-22 were drilled to test lateral extensions of high-grade gold-silver shoots intersected in the southern Amy Vein in an earlier scout drilling program.

News release 06-04 dated January 31, 2006 reported on the first three drill holes of the phase two drill program. Drill hole's LDG-20 and LDG-21, representing the 4th and 5th drill holes of phase two, were targeted to test lateral extensions of intercepts from drill hole LDG-03 at 33 meter and 66 meter positions south along strike. Drill hole LDG-22, the 6th drill hole of phase two, was drilled 117 metres north of LDG-03 and below an earlier Aneka Tambang hole BOS-2 as part of the infill program between LDG-03 and LDG-04. All holes were drilled at right angles to the strike of the vein and at -45º inclinations.

In all three drill holes significant widths of quartz veining were intersected and again confirm the near vertical dip and pinch and swell nature of the veining. An extensive section of variably mineralized wall rock (in the foot wall) immediately west of quartz veining intersected in LDG-21, returned surprisingly elevated gold results of 10.35 m @ 1.32 g/t Au and 29.70 m @ 4.24 g/t Au. These assay results have subsequently been checked by reassaying (see below). The anomalous gold tenure of wall rocks has been confirmed, and will require infill drilling in this vicinity to better understand the nature of this mineralization. LDG-22 has confirmed the presence of high grade gold-silver shoots within the Amy vein, north of this point, and justifies the need for the on-going northwards infill program.

The extensive section of gold anomalous, variably mineralized wall rock immediately west of the quartz vein intercept (intercepts: 10.35 m @ 1.32 [0.75] g/t Au & 2 [2] g/t Ag from 31.15 m and 29.70 m @ 4.24 [2.23] g/t Au & 4 [3] g/t Ag from 48.60 m) was checked by re-assaying selected pulp and re-splits of the bulk samples stored at the Intertek Testing Services (ITS) laboratory in Jakarta. This included quartering residual drill core over two broad intervals, then re-sampling on a tighter geological basis and comparing those results with the originals. The laboratory re-assays displayed negligible differences from the original samples assayed, while the quartered core results [shown in brackets] did return significant differences as compared to the original half-core samples. We believe that the significant difference is attributable to the nugget effect and the much smaller sample size.

The Lemonga Prospect is a low-sulphidation epithermal quartz vein system over which surface mapping by Southern Arc has confirmed hydrothermal argillic alteration within an area approximately 1 km East-West by 1.5 km North-South. Five quartz vein targets, named Amy, Betty, Cici, Dessy and Evi, have been identified within the alteration zone. The best exposed vein, the Amy Vein, has a mapped strike extent of at least 950 meters.

The information in this release has been compiled under the supervision of Southern Arc's Vice President of Exploration Hamish Campbell B.Sc.Geology, MAusIMM. Mr. Campbell has over 21 years of international mineral exploration experience including 19 years in Indonesia during which he has held such positions as Exploration Manager, Senior Geologist and Consulting Geologist. Mr. Campbell has sufficient experience relevant to the style of mineralization under consideration and qualifies as a Qualified Person as defined in terms of NI 43-101. 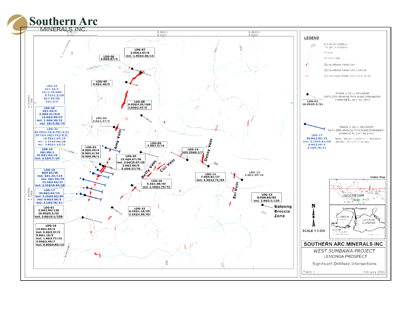