Southern Arc Minerals Inc. (TSX Venture: SA) is pleased to announce that the company has received assay results from a further five diamond drill holes of its phase two drilling program at the Lemonga Prospect located on Sumbawa Island, Indonesia. Holes LDG-35 to LDG-39 were drilled to test lateral extensions of high-grade gold-silver shoots intersected in an earlier scout drilling program, along with CSAMT ("resistivity") linear targets interpreted as extensions of known veins and breccia zones.

Drill holes LDG-36 and LDG-39 targeted regions of resistivity highs in the east of the prospect area, interpreted as underlying both the western and central Baleong hydrothermal breccia zone. Both holes were drilled more or less along the same section, but on either side of scout drill hole LDG-13 (2.90 m @ 2.10 g/t Au & 125 g/t Ag). All holes were drilled at right angles to the strike of the veins and/or interpreted resistivity zones at -45º inclinations.

Further results from the southern segment of the Amy Vein, particularly from drill holes LDG-35 and LDG-38, confirm the presence of higher grade ore shoot(s) exhibiting an irregular surface confined by the geometry of a second generation auriferous quartz-sulfide vein event. Previous petrological interpretation has suggested the possibility of considerable depth potential for extensions of such shoot(s) over an approximate length of 225 m of the poorly outcropping southern Amy Vein segment. These deeper targets will be tested in forthcoming drill holes.

The extensive Baleong hydrothermal breccia zone exhibited better precious metal grades on its western rim than within the central portion. This might be attributed to late-stage auriferous quartz±sulfide veins and veinlets, preferentially occupying the more silica altered extremes of the breccia. Further surface work, such as trenching within both western and eastern edges of the breccia body, will be undertaken prior to any further drilling in this area.

The Lemonga Prospect is a low-sulfidation epithermal quartz vein system over which surface mapping by Southern Arc has confirmed argillic alteration dominant within an hydrothermal upflow area approximately 1 km east-west by 1.5 km north-south. Five auriferous quartz vein targets, named Amy, Betty, Cici, Dessy and Evi, have been identified within the alteration zone. The best exposed vein, the Amy Vein, has a mapped strike extent of at least 950 meters.

Qualified Person and Quality Control and Assurance
The information in this release has been compiled under the supervision of Southern Arc's Vice President of Exploration Hamish Campbell B.Sc.Geology, MAusIMM. Mr. Campbell has over 21 years of international mineral exploration experience including 19 years in Indonesia during which he has held such positions as Exploration Manager, Senior Geologist and Consulting Geologist. Mr. Campbell has sufficient experience relevant to the style of mineralization under consideration and qualifies as a Qualified Person as defined in terms of NI 43-101. 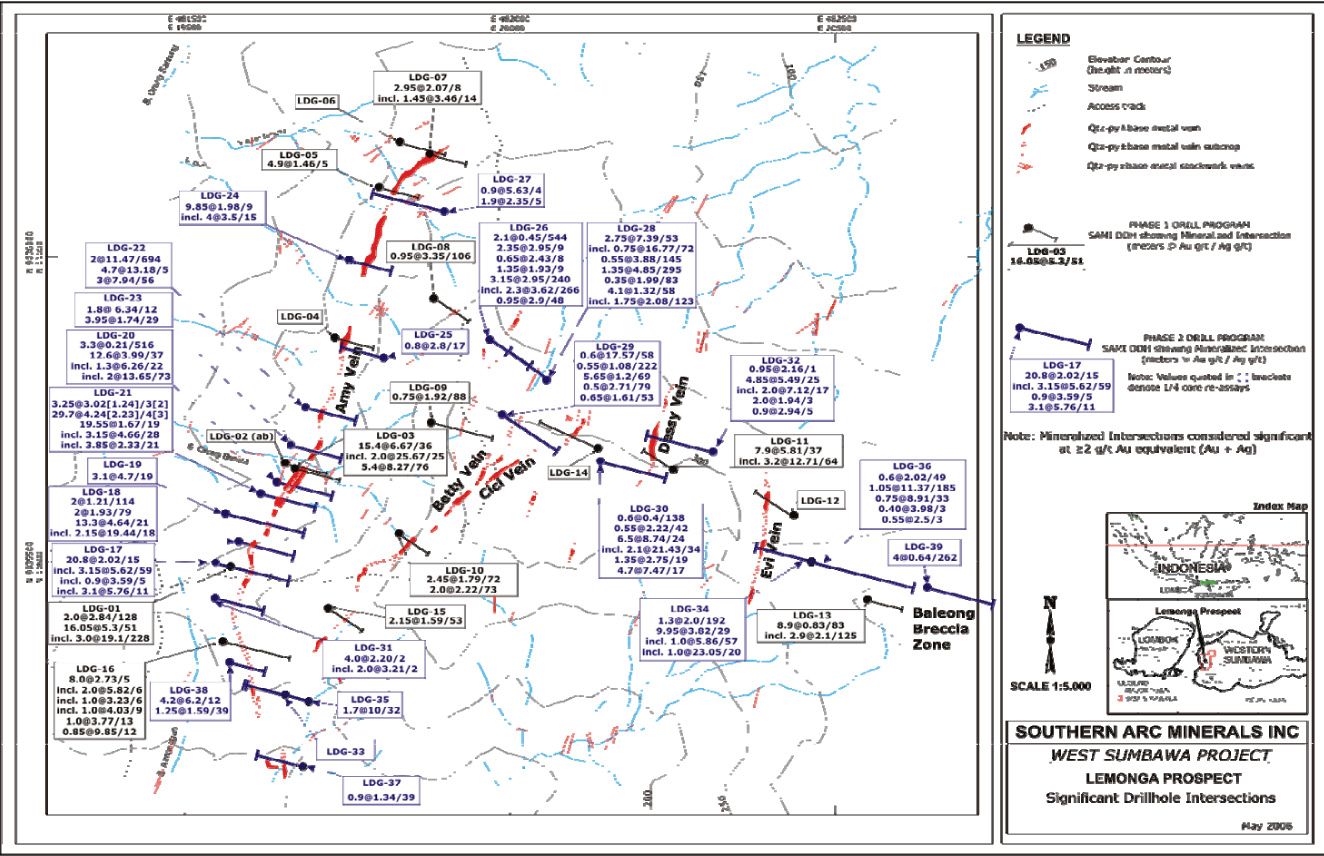