Southern Arc Minerals Inc. (TSX Venture: SA) is pleased to announce the commencement of phase two drilling at its Lemonga Prospect located on Sumbawa Island, Indonesia. This program will consist of 3,500 metres of diamond drilling designed to test continuity of high-grade gold-silver shoots in quartz veins intersected in an earlier scout drilling program (16 holes totaling 1,498.75 m). One drill rig is currently in operation and will be followed by a second rig which will be used for shallower infill drill holes and peripheral exploratory scout holes.

The Lemonga Prospect is focused on a low-sulphidation epithermal quartz vein system over which surface mapping by Southern Arc and previous operators has confirmed hydrothermal argillic alteration within an area approximately 1 km East-West by 1.5 km North-South. Five quartz vein targets, named Amy, Betty, Cici, Dessy and Evi, have been identified within the alteration zone. The best exposed vein, the Amy Vein, has a mapped strike extent of at least 950 meters. Eight drill holes have been drilled along the strike of the Amy Vein, with high grade shoots intersected in the southern portion over a 300+ m strike extent.

Results of routine petrological studies on drill core samples by Sinclair Knight Merz (SKM), New Zealand suggests that at least 450 m vertical extent of potential gold-silver mineralization remains intact largely above the boiling zones of an extensive paleo-hydrothermal upflow regime. SKM recommends "...that further drilling should be targeted at relative levels below 50 metres above sea level at vein swells and if this is successful breccia pipes should be targeted at a similar depth particularly where they are intersected by veins...." Again such concepts have included into positioning of drill holes.

The information in this release has been compiled under the supervision of Southern Arc's Vice President of Exploration Hamish Campbell, B.Sc.(Geology), MAusIMM. Mr. Campbell has over 21 years of international mineral exploration experience including 19 years in Indonesia during which he has held such positions as Exploration Manager, Senior Geologist and Consulting Geologist. Mr. Campbell has sufficient experience relevant to the style of mineralization under consideration and qualifies as a Qualified Person as defined in terms of NI 43-101. 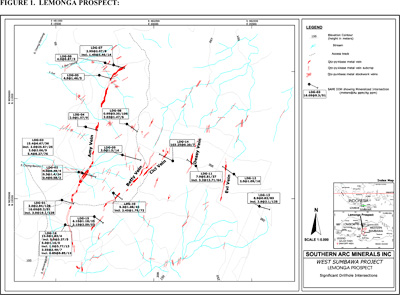